I have always been interested about bad guys in the movies. Where are they coming from and why they are acting in such a brutal way. I just saw one version of Frankenstein in Finnish Theatre and I felt like I was building some kind of monster myself at the same time.

Theme is officially called Eino. It’s the name of my mothers father (died in a war long before I was born) and he has nothing to do with the nickname Franter. The theme I was building seems to be half of Frankestein, half Monster. And I like it!

Support for all kind of plugins

Why do I call it Franter? Because when I started building this theme it was supposed to be one column blogging theme. But then Satu theme was released and it was pretty much what I already had in hands so I started adding stuff to the theme. And when I finished one part of the theme, I added another part. And another one. And another one.

You can check out the demo and here are couple of supported plugins for the theme.

Theme is bloated with CSS

No, not really. Naturally there are some extra lines of CSS in themes style.css but not that much. And plugins CSS files are only loaded when you actually install and activate the plugin. So there is no extra bloat.

But who needs all those plugins?

For most of the sites you won’t need all those plugins at the same time. But if you think rock artist for example, they might even need all of those. They want to communicate with their fans and bbPRess and BuddyPress gives you tools for that. And you definitely want to sell your digital downloads or t-shirts in your site.

You can do crazy stuff with theme Customize

I could load more screenshot here but it’s better if you just try it yourself.

Eino Theme will only work with WordPress 3.6 or later

I like the new Post Formats functions that are coming to WordPress 3.6. They give you the freedom to design different post formats more easily. But they will only work in WordPress 3.6 or later.

For now you can only find Eino in Github. Naturally I will release this theme right after WP 3.6 is ready.

It would be great if you can give it test spin in your local WP 3.6 test environment. Or check the code in Github and give me feedback.

This theme pretty much represent all that I know about building themes right now. But after one year when I look back I might think differently.

Join me in the dark side of the moon 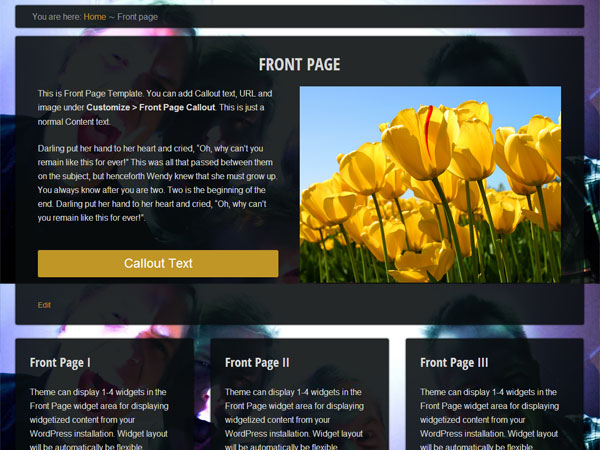 Am I evil? No, not really. Just another theme.